For more than 30 years, Larry and LeAnn have been helping the church around the world develop programs for leadership and church administration. Currently, they work alongside the leadership of the Church of God in Côte d’Ivoire to create strategies for planting French-speaking churches. They also teach at West Africa Bible Institute (IBAO) and develop French literature for the church in Africa. LeAnn also carries responsibilities in the women’s work, a literacy program, and Christian education.

The Sellers began their term in Côte d’Ivoire in 1996, planting the first French-speaking church in West Africa for the Church of God. They have been instrumental in the starting and leading of West Africa Bible Institute (IBAO) and are teaching there. They are also involved in the planting of a work in neighboring Burkina Faso.

The Sellers family started out as missionaries to Haiti with the Missionary Board and has since adjusted to living in seven different countries on three continents, been exposed to several different languages, and lived in conditions from civil war to coup d’état. In spite of people’s view that missionaries suffer great deprivation, they feel very fortunate to have raised their children abroad for the numerous advantages it has offered.

Larry was born in Texas, but his childhood years were spent in France and Algeria. He earned bachelor’s degrees in music and missions from Gulf Coast Bible College (now Mid-America Christian University) and a master of arts in religion, with a concentration in Christian missions, from Anderson School of Theology. He recently completed a doctor of missiology degree from Fuller Theological Seminary. LeAnn was raised in Florida and earned a BS degree in elementary education at Gulf Coast Bible College, now Mid-America Christian University.

They married in December 1985 and then completed a full term of service in Haiti. Their first child, Laura, was born while serving there; their son Lee was born during their term in Rwanda and Congo. 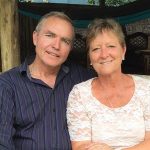 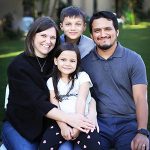