Such a Simple Thing: Water

Editor’s Note: The hospital in Haiti is one of the eight projects featured as part of Global Strategy’s year-end impactX2 giving campaign. This post originally appeared on Mark and Kathy Fulton’s blog at http://haitifultons.blogspot.com/2018/11/such-simple-thing-water.html. Posted and edited with permission.

For the last few months, this statement has been uttered many times at the Hôpital L’Eglise de Dieu Réformée. From bathing patients to mopping floors to flushing toilets to doing laundry, hundreds of gallons of water are used each day. One day, as I entered the hospital, one of our OB/Gyns met me at the door and announced: “I have just finished my second C-Section and have been using alcohol, bleach, and hand sanitizer to clean myself up. If we are to continue, we need water!”

I could not and cannot argue that point.

Since the days of opening as a small clinic in 2005, the Hôpital L’Eglise de Dieu Réformée has been blessed by missionary Phyllis Newby’s generous spirit and her sharing of the water provided by the one well on the property. As the demands for water increased with the growth of the hospital, it has become necessary to regulate the water flowing from that well to the hospital so that Miss Phyllis will have an adequate supply for the more than 60 people living under her auspices. 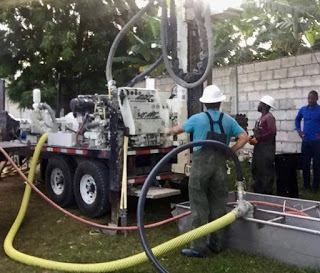 First attempt to drill for water

There was no question that a new well needed to be dug, and we could tie it in with the other well on the property so that it could serve as a back-up for the water needed for Miss Phyllis’s needs should a problem arise. So the search for water began. It seemed like such a simple request. In early August, a fellow missionary, Nicky Runk, came to the Church of God property where the hospital is located and began to dig for our much needed liquid “manna.” With the rocky, sandy terrain, the drilling was difficult and after a few hours of digging and the breaking of parts of his rig, Nicky was forced to abandon the project until at least November of this year. After reiterating that the area of Saintard is a difficult area to dig, Nicky’s advice was simple: “Pray for water!”

But the cry at the hospital became louder: “We are out of water and we need water to work!” 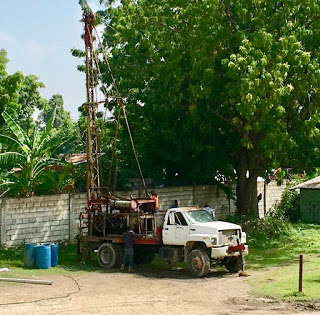 Second attempt to drill for water

After several weeks of prayerful searching for a qualified well-driller, we identified one and signed a contract. Drilling began again in mid-September. After a few weeks of digging and multiple broken parts, the Haitian well-drilling team stated that they were not sure that water was available where they were digging and they felt that abandoning the site would be better.  Within a few days, they and their equipment were gone. We were unsure of if and when they might return. Hearing of this, I contacted Nicky Runk again, and with his God-given determination and prayer, he agreed to return to try to find water again in November.

Again we waited, and again we heard the frustrated cry: “We are out of water!”

After a long two weeks, the Haitian company returned with another well drilling rig, borrowed from another company. The man in charge said they would try one more time. They began again. After finally passing through the nearly impenetrable shelf of rock and surpassing 200 feet in depth, the group still had doubts of finding water. Prayers were lifted in the Saintard community, in the US, and by friends in so many places, but water was still not found.

Last Sunday, at around noon, I received a phone call from the hospital.

I never thought those words would be so exciting!

“Not only did they find water, but the flow rate is about 16 gallons per minute. They said it was like a river.” 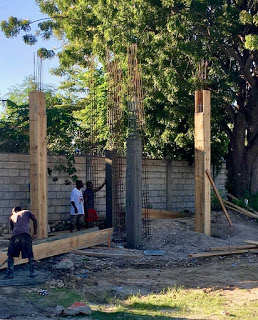 As we begin construction of a water tower, within a few weeks, we should have a good supply of water at the hospital. Until then, when I arrive at the hospital and I hear, “We are out of water!”, I know that it is temporary and I smile.

In Exodus 17 1-6 (NIV), we read of the Israelites experience with finding water:

The whole Israelite community set out from the Desert of Sin, traveling from place to place as the LORD commanded. They camped at Rephidim, but there was no water for the people to drink. So they quarreled with Moses and said, “Give us water to drink.”

Moses replied, “Why do you quarrel with me? Why do you put the LORD to the test?”

But the people were thirsty for water there, and they grumbled against Moses. They said, “Why did you bring us up out of Egypt to make us and our children and livestock die of thirst?”

Then Moses cried out to the LORD, “What am I to do with these people? They are almost ready to stone me.”

The LORD answered Moses, “Go out in front of the people. Take with you some of the elders of Israel and take in your hand the staff with which you struck the Nile, and go. I will stand there before you by the rock at Horeb. Strike the rock, and water will come out of it for the people to drink.” So Moses did this in the sight of the elders of Israel.

To learn more about the ministry of the hospital in Haiti or to contribute to its ministry, click here. To read other posts in this impactX2 series, click here. 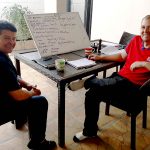 In Their Own Words: Jason & Abby Torgeson on Language LearningFEATURES, GLOBAL STRATEGY 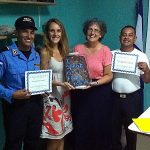